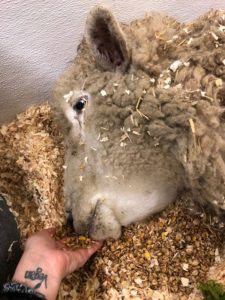 On Boxing Day at 4 pm we got a call from a friend who had just rescued a sheep.

My first question was, “Okay what is wrong with her?”
“Well, she is lame and has an eye infection,” our friend said.
“OK, let me call our vets and see if they are open.” I said and reached for the phone.

Luckily the vet was open and we had the sheep delivered to their care and agreed to pay the costs. Later that night we got a call and the vet recommended euthanizing her….what!?! For an eye infection and lame? Well it’s turns out she was much worse than initially thought, but the vet was willing to try and hydrate her through the night and see what we were dealing with.

The next morning I ran to the vet with food for her. My heart was broken when I walked in. She was lying on her side, trying to run. I got down with her and started hand feeding her and she was starving. The vet agreed to try more hydration and wanted a blood test to see what we were dealing with. We ran out to get hay and came back and they had her lying upright after the blood test and she started eating the hay. We jointly agreed with her eating to give her a chance and the vet gave her more medication and more hydration through IV.

Unfortunately the next morning the call came in. She was back on her side and absolutely no improvement. We discussed it with our friend and made the decision to end her pain. I went and picked up her body and named her “Dolly” and delivered her body to the B.C. Government lab for an autopsy. It would take 10-14 days for full results.

The first results showed that she had no substance to her and obviously not eaten in awhile before we got her. The eye infection was from lying on her side in the mud. During this time the SPCA made the news for visiting this farm and found other cases of neglect, nothing serious and after a few days, because the owners had listened and acted upon the recommendations of the SPCA, no charges were laid. A week later the complete autopsy came through. Dolly had numerous broken ribs and was completely malnourished.

Thanks to our friend who paid the owner $50.00 to save her from her misery, Dolly died with a name and without anymore suffering. She died with people who cared. Maybe the owners should have been charged, we do not know the whole story. We just knew Dolly.