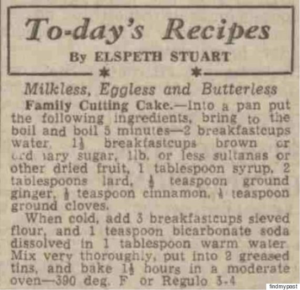 Ok, admit it, who hasn’t thought that a cake without eggs, milk and butter would be flavorless, dry, bland and like putting a forkful of hay in your mouth? Sure, vegan bakers get a bad rap because no one can actually wrap their heads around the idea that you can actually make a delicious morsel without the use of any kind of animal product. During the depression, many of these products were rationed, and out of necessity “wacky cake” or “war cake” was born. Of course, back then, no one thought to call it a vegan cake, but that’s exactly what it was.

Moving ahead many decades, and we have managed to refine vegan baking to an art form. Many vegan chefs have worked hard to change the perception of vegan baking, yet the prejudice still exists that vegan=flavorless. So, how do you change the mind set of people set on believing that you need animal fats to make something tasty?  Personally, I am not beyond a little mild deception and trickery.

For many years, I worked as a pastry chef for a large hotel. Although that is no longer my line of work, I still get called upon to produce special occasion cakes for family and friends. This year, 2 of my nearest and dearest decided to get married. She-vegan, He-not.  He would not listen to the idea of a vegan cake, rolling out that oft heard statement (and I quote): “It tastes like sawdust.” Grrr…a typical man, stubborn, and not to be convinced otherwise, no amount of cajoling would entice him to consider that a vegan cake could be delicious.

Time to roll out the deception and trickery.

We arranged a night for him and his fiancé to come over for a cake testing. I told him that I understood his wanting his guests to have an amazing cake, and although I didn’t agree that vegan would not taste good, Hey, it’s your wedding I’ll bake whatever you want. Of course, secretly I let his fiancé in on my evil plan, which was to bake purely vegan options and pass them off as regular cake.

On the night in question, they arrived to 3 different tasting cakes. The bride sat by watching her husband to be taste all 3, not saying a word, When he pronounced them delicious, and couldn’t quite decide which one would make the best option, she leaned over grabbled the fork, and shoved a huge forkful in her mouth. His jaw hit the table. “What the ?????” Of course, we had to come clean and admit that all of the cakes were vegan. A lot of laughter from the women at the table, and a sense of shock from the groom. He said if I could make it taste that good, bring it on to the wedding!!!

The day of the wedding, cake was served before the groom’s speech. When he thanked me for providing a “wickedly good vegan cake”, all around me I could the whispers “that was vegan?’ I gave out that recipe more times than I can count that night, and would like to think I changed more than a few peoples interpretations of what a vegan cake is! 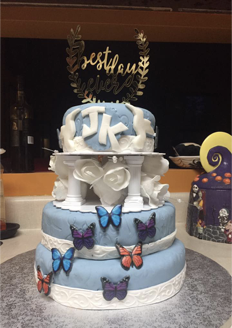 If you’re looking for the chocolate cake of your dreams, this is it. No one will even know it’s vegan!