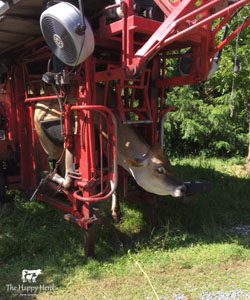 Our cows have grown and Desi will be 4 and Sparky and Scooter turning 3 and they have never had their feet trimmed until now. The idea of a farrier doing cows has been a big worry until we were recommended to The Happy Hoofer. Kevin is a local guy with a portable “squeeze” that looks kind of like a tank..just the look of it is enough to scare a sanctuary owner…not sure what the cows will think.

Yesterday was the big day. The cows were out in the big field and the truck and squeeze arrived. Small problem. Normally the loaded cow advanced through the front, which meant loose cows…hmmm

We set the machine at the gate and set up a small chute and I called the cows. Ralph and Harmony burst out laughing as the cows came running in response, not normal for cows to come to their names…so, the process started. Two cows both tried to fit as one and Desi was the winner. He slowly walked into the chute , tentatively, poked his head out , struggled for a second and the machine gently lifted him off his feet with a belly band. Harmony put his hind feet in soft grips and Ralph swung in on the built in stool and clipped a foot and checked it, then the next, all within 2 minutes. The feet were lowered, the front ones raised,and both done. It took a couple of minutes to back him out because of the traffic jam behind him and Scooter was next. 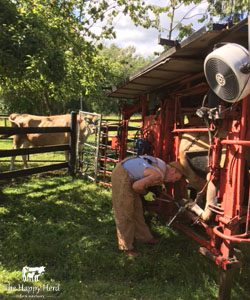 Scooter has always been the most sensitive after his long fight for survival (he was just a day old and didn’t get his mother’s milk. He developed pneumonia and then scar tissues on his lungs but finally, after 3 long months, got him healthy) and yet he finally went in with the rattle of food and me calling his name. Again, all feet done in 5 minutes. One of his feet had chipped off but no damage. Now the problem, Sparky was impatient and wanted in! Now! Lucky Scooter got to go out the front door and run loose for 10 minutes. Sparky got his feet done and backed out and then we safely corralled Scooter in the next field.

The whole process took no more than 40 minutes and that included set up and repacking. No stress, big pile of poo to clean up..nice neat feet and cows with no bad memories…what a great day! And Harmony and Ralph wanted to donate their time as well…. 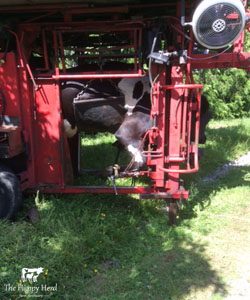